Opinions and Facts will vary with today’s topics and conversations. Links to proposals and news stories will be added in the future.

Prince: Now I want to ask you some Tough Questions.

Prince: Now this is a big project no doubt, which will require “big money.” But the biggest concern that a lot of Bostonians and Western Mass citizens are talking about is “Taxpayer Money.” So I must ask you, “‘Will you be using taxpayer money to fund this project?’ And if so, ‘what will it be used for and how it will prevent a financial boondoggle.’”

JF: Taxpayer money will be spent on Transportation and Infrastructure—on programs and developments that are already in the queue. And any type of infrastructure work will be on improvements towards the public transportation system. Secondly, when people think about the Olympic and Paralympic Games, they should think about “what the taxpayers spend on hosting something like the Boston Marathon?” The type of costs we incur every single year for the past x-amount of years on the Boston Marathon, are similar costs to what taxpayers would incur to host the Olympic and Paralympic Games. In the grand scheme of things, I never heard anybody complain about the dollar and cents spent on the Boston Marathon—I never read an article once! The physical plan of the Olympics themselves will be covered by private-public partnerships. The operations of the Games is a very detailed budget, so, for that, it will be covered by ticket sales, sponsorships, and TV revenue–which those revenue streams continue to improve over periods of time.

Prince: Next question is Housing. Once the stadiums have been built, “‘How will it affect housing in the surrounding neighborhoods of Boston? And the costs of housing in the future?’” Some fear of Gentrification, mentioned by City Councillor Tito Jackson, which may displace low-income residents of color and working-class residents outside of the city. While others fears ghost cities or white elephants as you might call it. So take this time explain that.

JF: I think people need to have the conversation at a granular level to understand that response. And what we are talking about is our proposal of redeveloping Downtown Boston. Our proposal has 88 acres of land in Downtown Boston to be used for redevelopment. It is a storage location; a tow lot; a 1970s garage; a MBTA bus wash facility; and meat packing facility. Right now we are having conversations with meat packing personnel. So that is a brand new neighborhood which would be created in Downtown Boston. I don’t think that it will impact anywhere, negatively, of what the Councillor has mentioned. Nor will it cause an escalation in prices for housing because it [the proposal] is a self-contained particular community.

When you talk about the village itself, it is going to be on the base side of the expedition center where the campus housing was going to go anyways—it was already a plan. And other things that are associated with the Olympics are going to be held, for the most part, at college/universities campuses. So the discussion about migrating into the communities and affecting pricing or whether the city is going from a cost perspective is a general statement—I think it is not applicable to what we are proposing.

One thing we are proposing is Franklin Park. We are proposing to: upgrade White Stadium (possibly having a modern pentathlon); build a swimming pool; and upgrade their golf course so we can run a venue over there. If people don’t want that modern pentathlon, in that area of Jamaica Plains, there are 10 other locations that we could put them–which the communities would want a pool; would want White Stadium renovated; would want somebody to put $2, $3, or $4 million worth of upgrades towards the golf course after the Games. It is the 2nd oldest golf course in America, and we haven’t spent a penny on maintenance for a long time. So if the community doesn’t want a modern pentathlon, there are other communities that would love to see that. There is no issue at all to do that.

We don’t want to go to any place where people don’t want us—and the same thing too with Boston Commons. We have heard from the people of Boston Commons that they do not want Beach Volleyball; are ears are wide open to that. Am I going to commit to people today that want to change that? No. But are we going to take what the community is saying in a very, very, serious way? Absolutely. We want this [project] to be in everybody’s interest; not just the people on the committee

Prince: Great. Next question is your comments on Sex-Trafficking. At one of the town hall meetings somebody brought up Sex-Trafficking and how the Olympics will give rise to it. And even though it does not relate to the bidding process, it is relevant to me and to a lot of people in today’s society (which is real in some parts of America). So “what are your comments on that?”

JF: Well, I was around when that comment got broached. I don’t know too much on the history of what’s gone on. I think that is looking at this opportunity as the glass half-empty instead of the glass half-full. When you host any special type of events, whether it be the Super Bowl parades, High Performance Car Speed Races, Tall Ships, Democratic Conventions, National Figure Skating Champions, etc., we should not be intimidated because of issues that we have not yet one-hundred percent arrested. There will always be deviant behavior in any community. I don’t think we should pre-judge the Olympics and I don’t think there is any connotation that the Olympics bring those type of behaviors with them—they might have had them in the past but I don’t know so I don’t want to comment on that. To me I cannot even fathom that that would be a problem in our professional environment of where we are now.

Prince: Then lastly is Transparency. “‘What will you do to be more transparent with city officials and residents of Boston and Western Mass, who may feel that you are not transparent enough?’ And, ‘Would you consider a statewide ballot question on the Olympics bid, which Independent Evan Falchuk is pushing for?’”

JF: Two excellent questions. Let me talk on the Transparency side.

“We be dammed if we do and be damned if we don’t.” We have been going around these different community meetings, telling everybody everything: what we are thinking about; explaining how the financing will be set up, etc. We are not going to satisfy everybody, and we recognize that. However, I think that is a very healthy conversation to have and we look forward to continuing that in the future.

The issue on Salaries—when we hire people. The minute we put something out there, that we are not required by law to do—we are a 501(c)(3)(4) and we are privately funded—we are showing the taxpayers “what we are doing?” and “why we are doing it?”—I have no issue with that whatsoever. Have we made mistakes? Absolutely, and we are not going to make any excuses for those mistakes whatsoever because we learn from them. Our heart is in the right location. If these Olympic Games are not good for the Commonwealth of Massachusetts, then we should not hold them. And I do not want to put my name on them, if they are not healthy for the future of 2030 or 2040.

With respect to a referendum, we have laws that govern on how we manage our systems. People should exercise their rights, if they want to do a referendum. I have no issue with that whatsoever—by any stretch of the imagination. We are not going to get in its way.

Prince: What do you want to say to my audience out there, and to the world, of why the 2024 Olympics should be hosted here in Boston?

JF: It’s a once in a lifetime opportunity. The city of Boston and the Commonwealth of Massachusetts will never have this opportunity again in a long time. It is for the first time, an opportunity like this, to come together as a community and think about–with a sense of clarity, a sense of acuity– “where we really want to be in the next generation?” And secondly, “‘how do we as a community, which by the way is very passionate about Sports, believe in that power and the educational value that is created from it?’” And, “how do we believe in the relationships, globally, that can come out of an opportunity like this?”

I share this analytic with people: an average Super Bowl Game in the past couple of years gets anywhere from 12-14 million tweets. Within the first 24 hours of Boston being nominated as the potential host of the Olympic Games, from the United States Olympic Committee, we got 86 million tweets world-wide.

This is an opportunity for Boston to showcase its strengths—academics, healthcare, green sustainability, community, diversity, culture, arts, and sciences—to the world! And I truly believe that the world has a strong interest in learning about Boston and the Commonwealth of Massachusetts. So I don’t think we should move away from this opportunity, without first having a real, serious, professional, adult conversation.

Prince: Great. If my audience wishes to learn more about you, your next town hall meeting, of if they want to get involved, where can they go?

JF: They can go to the webpage www.2024Boston.org. And for anyone who wants to volunteer or get involve, we welcome them to ask the tough questions. I want us to make sure that we take the time to sit at the table and have a constructive conversation. You may not like the answer we give you, but at least you will feel that we looked you right in the eye when we give you the facts and figures as we know them.

Prince: Great. That’s end of my interview. Thank you so much for taking the time to answer my questions on the Olympics. 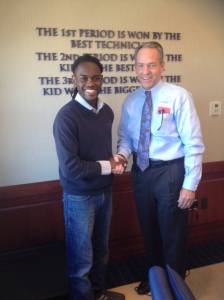