Where can I find an Italian Restaurant in San Diego, Ca? Come to Operacaffe located at 835 4th Ave. San Diego, CA 92101 (across the street from Balboa Theater). 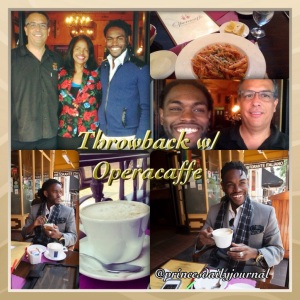 Peter Morales, the general manager of Operacaffe, is as friendly and approachable as they come. What I love about him is his sincere appreciation, for allowing me to do my photo shoot at his restaurant–-he even didn’t ask for any paperwork. And because of that his restaurant has become the cover photo of my website for the past two years.

Peter has been with Operacaffe for over 6 years, and what makes Operacaffe so unique is its Tuscan cuisine and hospitality. Operacaffe is one of two restaurants that has been awarded the Marthio Q award by the Italian government and the Italian American Chamber of Commerce.

Operacaffe started with Roberto Bernardoni and his passion for Tuscan cuisine.

” In 1977, at the age of 31 Roberto decided to leave his civil service position in Florence and opened his first restaurant “Ganino”. Ganino started as a family business. Shortly thereafter Roberto rose to prominence, started to be recognized throughout Tuscany, Italy, and began to enjoy world-wide recognition and fame with Ganino. Following his success with Ganino, Roberto opened his second restaurant “L’Osteria delle Tre Panche”, again in his beloved Florence, together with his wife Patrizia Branchi.” —www.operacaffe.com

In 1991 Roberto moved to California, where he fulfilled, along with other business partners, his lifelong dream of running a restaurant in the United States called “La Strada” It would be after 16 years of serving his traditional Tuscan dishes that he opened another restaurant which is known today as Operacaffe!

But in 2009, Roberto unfortunately passed away. And even though I never received the opportunity to thank him personally, for providing me a beautiful porch for my photo shoot, I am still grateful to have tasted his legacy. And now I can give back by immortalizing his restaurant through my website.

Thank you Roberto and Patricia for everything! Salud! –Prince Sefa-Boakye

If you are in San Diego and are looking for great Italian Cuisine and/or a location for your next photo shoot, please come to Operacaffe or call Peter Morales at 619-234-6538.