Prince Sefa-Boakye host of the Prince in The City Show talks about Senate GOP’s latest move in blocking the Equal Pay Act for Women.

On each and every show, I don’t just provide you news in the City but current events around the world–and how they impact you and the world around you. And so, on this special segment I talked about the Senate GOP’s latest move to block a bill that would provide equal pay for women.

To comment on this topic, I invited Lauren Culp (executive producer of UR Business Network), Nathan Roman (co-host of the Business Sides of Sports), Jonathan Brum (a freelance journalist). But before we delved into this discussion, I first shared my Person of the Week, who has inspired millions of people through words or actions: Adrianne Haslet Davis (Boston Bombing Survivor) 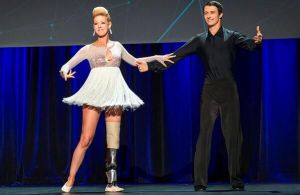 Adrianne Haslet-Davis is a Boston Marathon Bombing Survivor who unfortunately lost her left leg in the attacks last year on April 15, 2013. But regardless of her circumstances, she found the will to overcome the impossible and fulfill her promise to dance again–which she did beautifully in a TED talk video given by Hugh Herr, the creator of her bionic limb.

Today, Hugh Herr (who himself lost his legs to an unfortunate accident) is continuing to bridge the gap between the impossible and the possible through his bionic limbs and robotic prosthetics–driven by nature and human ingenuity. And my favorite quote from his TED talk video was this:

And so, I want to sincerely say “thank you” to Adrianne and Hugh for reminding us the power of the human spirit and how it will never cower against the face of terrorism.

(To watch this TED talk, go to my website click on Motivation Monday–“Get Back on Your Feet and Dance Again”)

Now to segway back into politics. My guests and I discussed the latest political move by Senate Republicans (GOP) to block equal pay for women.

On April 9th 2014, Senate Republicans banded together to block the Paycheck Fairness Act (Equal Pay Act)–a Democratic bill which aimed at narrowing the pay gap between men and women.

The legislation failed to clear a 60-vote threshold to open a debate on the bill, falling short by 53-44. Immediately after the vote, senior Democrats vowed that they will bring the bill up for future votes–daring the GOP to block a bill again so they can appeal to women voters in a tight midterm election that is coming this year.

So what does this exactly mean for you?

It means that you get to see the devious tricks that Congress uses to prevent progressive change from happening. In this instance, the discussion of equal pay for women will never be debated nor voted on until later this year. This is a common tactic used in Congress to delay a bill from becoming law.

However, instead of talking down against this congressional act or even discussing bill, we unintentionally diverted our energy towards a more sinister enemy: The Government.

While half of my guests believe that government isn’t a good body to distribute wealth in this country, I try to remind everyone that a institution (or the government) isn’t a body at all. They don’t shoot red laser beams from their eyes or have a mind of its own.

“It is people that run institutions and not the other way around.”

I even mention that the government has done good things for America such as passing the Civil Rights Act of 1963, providing equal rights to African Americans, but still it wasn’t enough to persuade their negative perception of what government is–furthermore we didn’t spend time to talk about sex discrimination or the equal pay bill.

However, this was still a great discussion–one of which that I want to have on every show.

Thank you Jonathan Brum, Nathan, and Lauren for your opinions and great insight.

To listen to our conversation, click on the link below.

If you have questions or comments, please direct them to my Contact Page which is located on my website.

I am a Political Correspondent. I provide Headlines News, Editorials, and Interview Stories Weekly for Prince's Daily Journal. To visit, go to www.princesdailyjournal.com View all posts by aztecwriter1