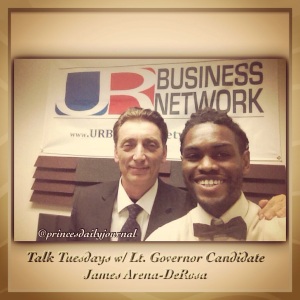 During my interview with extraordinary professionals, I take questions from the Twitterverse for my guest to answer.

.@Arena_DeRosa@princedjc What do you think of Governor Patrick’s announcement to continue Heat and Eat LIHEAP benefits? #mapoli

From my interview with James, he told me that he applauds Governor Patrick’s efforts. James recognizes that Massachusetts has been hit hard with harsh winters–and that the recently passed Farm Bill has cut SNAP Benefits. However, he is enthusiastic that the $20 million dollars in federal aid will leverage SNAP Benefits, which will put another $80 in the pockets of many families in Massachusetts. James says it is consistent with the Democratic values of inclusivity, and shows how leveraging federal programs can help thousands of struggling American families–especially in Massachusetts.

@princedjc I’m curious if James has any ideas to make sure students are fed breakfast imagine that might help test scores? #PrinceinTheCity

From my interview with James, he told me that many people in Massachusetts have neglected this important issue; he is striving to bring awareness in his campaign. However, he praised the success of one small elementary school in Brockton, Ma (which has changed their breakfast plans from 150 to 600 breakfasts) and how they were able to yield a tremendous impact towards their students and their academic achievements. He says if one little school in Brockton can do it, so can many.

By following this example, it will leave millions of dollars on the table for the people of Massachusetts to use. By investing and raising awareness on this important issue, it will solidify four important foundations of society: health, education, economy, and children

If you have more questions, or if you need clarification on any one of these questions, please go to www.jad2014.com, and contact his campaign.