Every Thursday, I post a miscellaneous article that I have written in the past or an interview of an extraordinary individual. 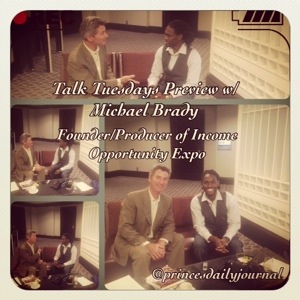 Mike E. Brady is one of the most interesting individuals that you will ever meet in your lifetime. He has hosted and produced PBS broadcast segments, dozens of TV and radio interviews and a variety of talk shows, as well as becoming a filmmaker. He has traveled the world, and holds a college degree from Boston University in geography.

Mike began his career in New York City during the late 1980’s and has independently produced dozens of successful consumer trade shows (Holistic Health Expos, Bridal Shows, Arts & Crafts Expos, Environmental Expos, and World Music Festivals)–attracting tens of thousands of attendees to a broad spectrum of industries in some of the largest and most prestigious hotels, convention centers and venues across the Northeastern region. But what people fail to recognize is how down to earth and compassionate he really is.

When I first met him at the Small Business Expo at the Hynes Convention Center in Boston, Ma, he did not in no way perceive himself to be a “hot-shot”–which there were plenty of at the expo; I met him when I just got done introducing myself and my website to a business woman during lunch hour at the cafeteria. When I got up, Mike approached me and said that he was interested in my services and would loved to be featured on my website–he immediately wanted to do an interview!

I was quite surprised by his response because my site at the time didn’t generate a modest value to anyone just yet. However, I still scheduled an interview with him for the following week, we met up, and he began to tell me his life story and his upcoming expo: “Income Opportunity Expo.”

When I sat down with him, I was truly amazed by his accomplishments and travels. But yet he sounded so humble that it was very hard to believe him sometimes. When I asked him, “How do you define success?” He put it simply and said:

“Being comfortable in your own skin, while living in the moment.”

Furthermore, he quotes Ralph Waldo Emerson and says, “To be yourself, in a world that is constantly trying to make you something else, is the greatest accomplishment.”

From my interview not only did I learn a great deal on what “success” is, but his passion towards helping people; Today I am glad that I have documented his passion in our interview together.

Thank you again Mike for the opportunity to interview you and I am so glad that my website has been useful to you. I look forward in doing great things with you and UR Business Network!

If you wish to hear his voice and learn more about his passion go to: URBusinessNetwork.com “Lemonade Stand” featuring Mike E. Brady

To get a complete bio of Mike go to  https://incomexpomedia.com/

To read my interview with Mike E. Brady, click on this link: Mike Brady: The Man Behind the Income Opportunity Expo