Every week I write a political issue that affects YOU and the WORLD AROUND YOU. 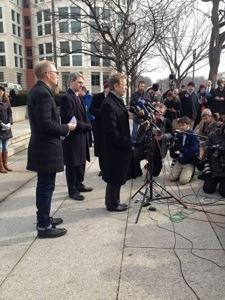 Today, Sen. Rand Paul and others have made a monumental step towards filing a class action lawsuit against President Obama and his entanglement of violating the 4th amendment under the U.S. Constitution Bill of Rights.

“I am filing a lawsuit against President Barack Obama because he has publicly refused to stop a clear and continuing violation of the 4th Amendment. The Bill of Rights protects all citizens from general warrants. I expect the case to go all the way to the Supreme Court and I predict the American people will win.” –Sen. Rand Paul

And as such Rand Paul will not only ask the Supreme Court to declare the Patriot Act (permission of monitoring all phone calls) as unconstitutional, but requests that the government “purge” any telephone metadata, from its database, that has been collected from “every domestic or international phone call made or received by the Plaintiffs (Rand Paul and others) and class members” [class members as in every U.S. citizen that has a telephone].

For those of you who are not aware of the 4th Amendment. It’s an amendment found in the United States’ Constitution Bill of Rights that prohibits unreasonable “searches and seizures” and requires any warrant to be judicially sanctioned and supported by probable cause.  “Searches and seizures” means a procedure which police or other authorities and their agents (NSA)–who suspect of a crime committed–do a search of a person’s property and confiscate any relevant evidence to the crime

*This Amendment became adopted in response to the pre-Revolution era in America which the British Government at that time abused the “right of privacy” by conducting unreasonable searches in the homes of Colonial Americans.

In this case, one important detail that I want to remind everyone is the language in this lawsuit. Sen. Rand Paul is not suing President Barack Obama for violating the 4th Amendment, but for “refusing” “to stop a clear and continuing violation of the 4th Amendment” which is the NSA.

As scandalous as this sounds, it’s really a lawsuit that seeks to demonize the President and declare the Patriot Act —which was in fact signed and implemented by the former President George W. Bush— as unconstitutional in the Supreme Court (if it does goes that far). Not to mention that it will ask the NSA to destroy all of its telephone metadata that they have collected from Americans without proper warrants over the years.

I doubt that the President will step down from this or receive any punishment. However will the President receive some form of repercussions? Indeed he will. This is probably the first time that I’ve heard a President being sued for anything. Although the President has enacted reforms to respect the privacy rights of every individual in the world, having a civil lawsuit filed against you does not look good on a political resume.

Also, “to stop a continuing violation of the 4th Amendment” means to completely dismantle the NSA, which will be unlikely. Doing this may harm the public sector by cutting jobs (which could lead to another financial mess) and leaving us unprotected from potential terrorist attacks. You can’t treat this as a meat cleaver approach, so again serious reforms must be enacted!

So how does this affect YOU and the WORLD AROUND YOU:

–Sen. Rand Paul has energized his Republican base and has proven to a formidable contender.

DISCLAIMER: THIS IS MY OWN POLITICAL OPINION. FOR QUESTIONS OR COMMENTS PLEASE COMMENT ON THIS PAGE BELOW.